one of them:  two spaces between sentences.

earlier this week, pryce re-posted, “out of an abundance of caution, the ap style book and the chicago manual of style are reinstituting the two-space rule between sentences to support social distancing.”  it literally made me laugh aloud.  my friend mona commented, “hard habit to break.  no going back.”  exactly.  it’s ingrained.  the red pen was generously applied to typing papers without two spaces; it was a rule sans excuses.

but the word “reinstituting” caused me some consternation.

i loved typing.  i even typed my high school science lab reports and poetry i transcribed out of composition notebooks that kept me company at the beach, in the tree outside my bedroom window, in the wee hours of the night.

and i have never-ever only used one space after a sentence or a question or an exclamation or a colon.

i cannot believe what “reinstituting” implies.  somewhere on the punctuation train, i stalled.  i realize formal changes may be due to typesetting and the difference between typewriters and computers and some debate over the ease of reading sentences, but how are we supposed to find out these things??  i asked d how many spaces he uses after sentences, to which he replied, “one.”  what?!  i wrote to joan-who-knows-these-things to settle this mushrooming problem.  though she said using two was out of habit, she sided with me.

and so i just went upstairs to dig out-of-the-depths my old APA book – the third edition of the publication manual of the american psychological association, copyrighted in 1983, which was both the bible and the biggest pain in the ass for writing papers in graduate school.  here it what it says on page 140: 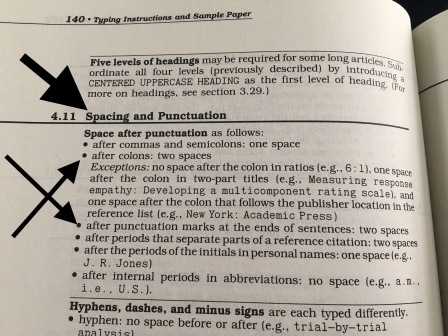 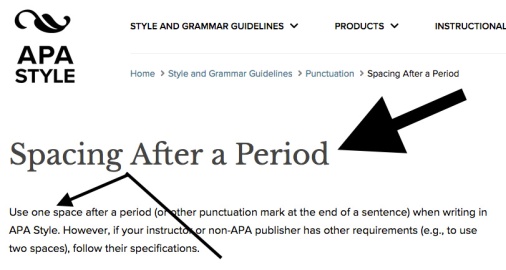 i don’t know if i will try to incorporate this “new”rule.  like kevin, who said he was taught two spaces and is sticking with it, i just might not be able to do it.

at this point, i hardly think anyone will whip out their red pen.

but i can hope that people – in reading my two-spaces-after-a-period-that-says-over-40-writing – will assume JUST a-wee-bit over 40. 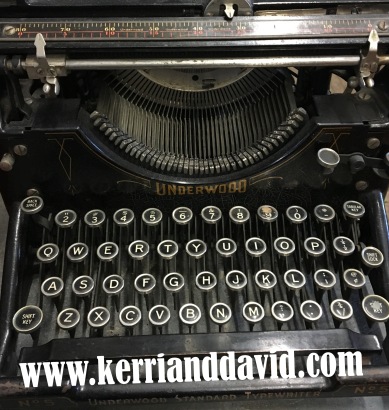