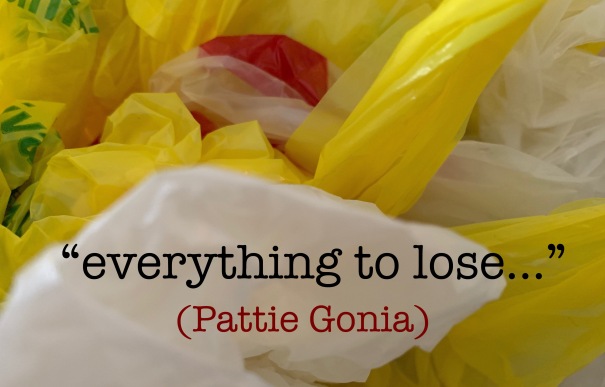 “one million plastic beverage bottles are bought every minute around the world. yet recycling rates remain low.”

close to midnight and the texts started arriving fast and furiously.  a warning from My Girl that she was “fighting with people on instagram”.  her passionate responses to objectors on #pattiegonia’s instagram were well-spoken, well-placed, adamant about the wellness of this good earth, vehemently supportive.  i paid attention.

pattie gonia is an environmental advocate drag queen.  a voice.  a loud, sincere, fervent, educated, inspired, contemporary, courageous voice.  pattie/wyn is out there making a difference.  it is easy to be proud of them, to stand with them.  with the partnership of rei, they have created video to draw attention to the things we, as earth-dwellers, have failed to prioritize.  if you watch their dramatic and profound videos, you will weep.  guaranteed.

we must pay attention.  what plastic bags, plastic bottles, plastic netting, garbage, waste….are doing to our mother earth is deplorable.  we would not live in such a house.  why then do we live on such an earth?

i was driven to nausea the other day when we were helping someone clear out a house.  it was our job to load things up in big red and go to the mini-dump not far from us.  we pulled up and backed up to one of many large dumpsters, all connected to a compactor, to throw in what we had in the back of the truck.   it took my breath away watching all the people throwing in all the stuff….just in this tiny corner of the world.  the great pacific garbage patch looms in my mind’s eye.  THIS is the reason we still have our 40-plus-year-old stove.  because i can’t imagine where it will go if we just throw it out to get a shiny new model before it’s necessary, just to make our kitchen look chic (which, incidentally, is impossible anyway.)

we have been conscious, using refillable water bottles, repurposing, recycling everything we could recycle, a practice of being consumers-of-less, less buying, less keeping-up-with-the-joneses, more picking up trash and, scarily, pulling up next to people who throw things out their car windows to tell them they ‘dropped something back there’.  but we have been learning. and we can do more.  we all can do more.  we have to.  pay attention.

“…right now, there are more plastic pieces in the ocean than stars in the milky way…” (everything to lose by pattie gonia)

it’s bracing.  and it’s tragic. and it needs our true attention.  as pattie gonia says, clothed in a dress made of plastic bags, fully standing in garbage, a ticking clock her companion,  “we have everything to lose.”

a short documentary to learn more about pattie gonia: