she sent us a video of her snowboarding with friends.  it was a crazy-good-full-tilt-snow-flying amazing video of them on a magnificently majestic mountain.  my heart literally sang watching it; you could feel the rush, the joy!  and then….there was this spoken line…at the end…My Girl, breathless from an outstanding run, with a laugh said, “my legs are tired; my heart is happy!”  this is how she lives.

but at the bottom of that powder-run there were no medals; there was no bonus, no ribbon or gold watch.  there was something more precious.  and kirsten knew it.  there was the moment of running it, of sharing it, of living it.  the absolute euphoria that comes with just doing the best you can, and putting your body and soul into it, capturing the moments you soar.

may this holiday season – and really, all your days – bring you those moments.  at the bottom of the slope, on christmas eve when you are in a dark room with a lighted tree, on a day you gather with family and friends and look around grabbing a few seconds to store away for later, on a facetime with those most beloved to you, when you’ve put away the last dish or driven the last couple hundred miles, when you have gone full-tilt, i know you will be a little tired.  but it is my hope your heart will be happy. 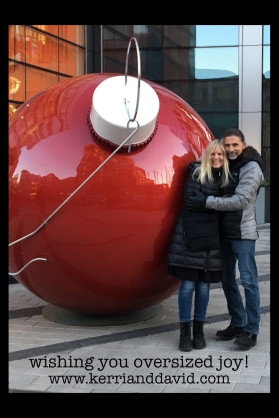 the snow had fallen and there were several inches of what my colorado mountain girl calls ‘fresh powder’ on the ground. many hours of desk-work inched us over the line of whether or not to take advantage of the snow. we’re kind of easy that way, though – the outside calls to us. both of us are kinesthetic and think better on a hike or a walk, moving, moving….

the woods were quiet. the sky was azure. the grasses were golden, standing proudly above 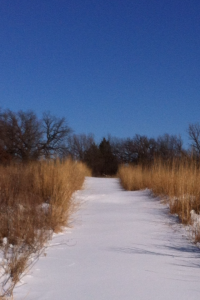 the snow, having survived the wind and driving snow. vivid color. in heavy boots, bulky coats, long underwear, double gloves and earmuffs we set out. we weren’t far into our hike when we realized that we were the first out on the trail since the snow. first after the deer. first after the rabbits and tiny birds that had hopped across the path. first after whatever animal it was that made enormous tracks in the snow. longer than his boot, these tracks kept us company for a long way, meandering in and out of the brush, in and out of the woods. we wondered aloud what it was. we quietly pondered that these woods were not ours. they are home to beautiful creatures, big and small. creatures that depend on the turning of the seasons, the sun, the warmth, the snow, the rain, the ecologic responsibility of those of us who are out there, for a bit of time, with them. 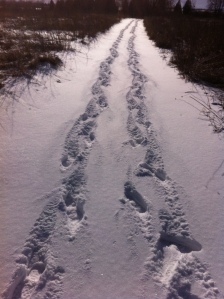 mostly, i was bowled over by the fact that we were the first people to walk out there since it had snowed. the trail through the prairie glittered in the sun and in the woods, the trees reflected majesty on the snowy path. we were first; we weren’t first. but to make the first people-tracks in the snow…to know that in at least the last 36 hours or so, no one else had walked there…something about that was humbling. hugely grateful for the universe in all its goodness, in that place of quiet-quiet, that space of pristine clear that single digit temperatures make possible, the smell of sun in our hair, i was struck by our smallness. four footprints in the snow, walking together, side by side. hand in hand. on trails. through the woods. in life. that’s really it – four footprints. each set of prints count. each stride counts. each breathless moment that we get to breathe counts. now counts.  now is the only thing that really counts, the only thing that really is.

we are first; we aren’t first. we are living.