she sent us a video of her snowboarding with friends.  it was a crazy-good-full-tilt-snow-flying amazing video of them on a magnificently majestic mountain.  my heart literally sang watching it; you could feel the rush, the joy!  and then….there was this spoken line…at the end…My Girl, breathless from an outstanding run, with a laugh said, “my legs are tired; my heart is happy!”  this is how she lives.

but at the bottom of that powder-run there were no medals; there was no bonus, no ribbon or gold watch.  there was something more precious.  and kirsten knew it.  there was the moment of running it, of sharing it, of living it.  the absolute euphoria that comes with just doing the best you can, and putting your body and soul into it, capturing the moments you soar.

may this holiday season – and really, all your days – bring you those moments.  at the bottom of the slope, on christmas eve when you are in a dark room with a lighted tree, on a day you gather with family and friends and look around grabbing a few seconds to store away for later, on a facetime with those most beloved to you, when you’ve put away the last dish or driven the last couple hundred miles, when you have gone full-tilt, i know you will be a little tired.  but it is my hope your heart will be happy.

standing in a stand of aspens.  simply magical. the way the leaves quake in the wind, the glowing bark that takes on the angle of the sun, the graceful spiring height.  and the quiet.  on a trail in the woods, the backdrop of the rockies peeking between the trees, i breathe easier, deeper.  i feel in tune with that place; its voice speaks to me.  i whisper back my gratitude.

from david’s painting INSTRUMENT OF PEACE, this morsel is ASPEN STAND. 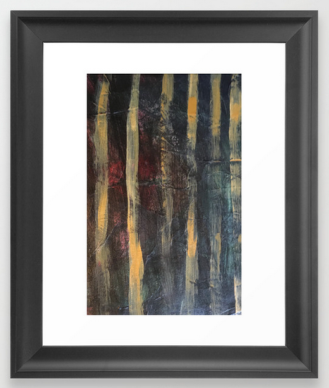 click on the print above and it will take you to ASPEN STAND products. 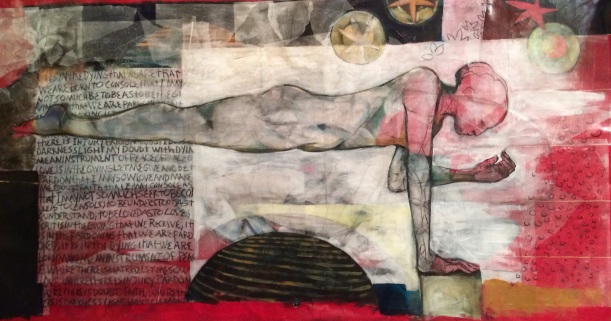 i don’t have to look further than my two children for examples of being relentless.

The Boy decided, early in high school, that he wanted to change his attention from baseball to tennis.  now, most of his classmates who were tennis players on the varsity team had played since earlier childhood.  The Boy had only hit the ball around on the court a few times with his very-best-growing-up-friend-miles or pierre-who-hung-out-here-all-the-time-in-high-school but his decision was made and he pursued it with zeal.  a part of the jv team, he practiced and took individual lessons, group lessons, worked with his coaches.  i, on the sidelines, sweated and watched, trying hard to be quiet as he pushed himself.  he, a natural athlete, was moved up to the varsity team and doubled-down on the hard work of tennis – a “game” possibly more psychological than physical….ridiculously tough on a mom.  he went to a university that welcomed him on their tennis team and, for years, i spent the better part of tennis season (and tournament season) driving all over the state and beyond, proud to see his skill on the court, proud to see his drive and, mostly, that it paid off for him.  now he applies the same strategic tennis-approach to his life, his career.  he was – and is – relentless.

The Girl decided, upon moving to the high mountains of colorado, that she, having never been on skis or other propelling-downhill-snow-gear (other than a sled), wanted to snowboard.  she was working in a professional (indoor office) position out there, but she spent every spare moment on the slopes, striving to learn.  every now and then she’d report in about her experience on copper mountain or keystone or breck or vail or ….  she broke her arm, she twisted limbs, she broke her helmet.  she persisted.  time passed and she traded up for better snowboards, more equipment; she asked more people for advice or pointers; she was a learner beyond compare.  she boarded in aspen, in snowmass, in patagonia.  she dropped off ledges and split-boarded up vast mountains.  fast forward just a few short years and she, no longer in an inside office doing the piece-of-paper-from-the-university-of-minnesota-work-she-was-trained-for, has taken the learn how to learn, learn how to persevere, learn how to dream – from life, from college, from her own purposeful heart – and is a snowboard instructor and a snowboard coach for a team in aspen.  she offers more than snowboarding to those around her; she is the picture of excited zealousness.  she was – and is – relentless.

so i………who read to them as little ones and tucked them in and drove them to music lessons and sporting events and played with matchbox cars and dressed barbies and ran alongside two-wheelers and crossed my fingers as they sat behind the wheel of the car and tried to instill a little appreciation of beauty and respect, and helped with homework and stayed up all night while they worked on last-minute-projects and rocked them to sleep at night with a well-loved-tattered ‘goodnight moon’ falling off my lap……..now learn from them.  to be relentless.

there is this adorable couple from mississippi on hgtv these days.  erin and ben star in a show called Home Town and they are working to restore their tiny town of laurel one beautiful home at a time.  my favorite moment, as they run commercials for this very popular show, is erin passionately looking into the camera saying, with the most charming southern drawl, “get up and DO it.”  you can tell she means this about every single thing.  and to her call to action, i just might add – and be relentless. 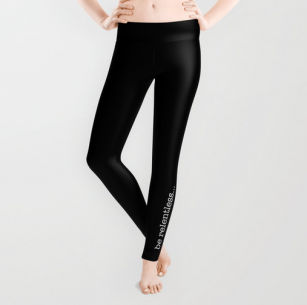