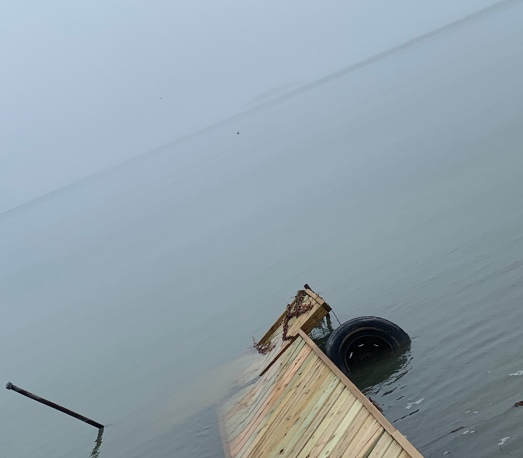 what is it they say about the best-laid plans?

we loved the old dock on this property.

with the exception of the spider webs that formed in-between the metal tying posts and the snakes that took to sunning on the warm old boards of the walkway,  it was charming.  the old bench at the end of the dock invited us to sit.  it stood stubbornly during rougher waters, its weathered patina and rusting pipes.

they decided it was time to refurbish the dock and two strappy island guys came in to do the job.  they took a few days over the period of a couple weeks to re-construct, to lay new boards over the old, to eliminate the spider-web-gatherers and to build a new bench. then they were done and the new dock was open for business.

less than a week, only one brief sit-on-the-bench moment and probably-before-the-bill-arrived later, the storm blew in.  the waves crashed on our shoreline, eroding away a good two to three feet, throwing debris onto the grass.

the dock tried.  it stood firm against the waves, larger than they said they had ever seen them in twenty years.  but it didn’t last.  the bench blew apart into the water, the new boarded walkway listed, listed.  and finally, gave way.  pieces of the new dock were angrily tossed to shore; even still, wood floats in the bay, riding the waves ever-closer to our little beach.

the best-laid plans, carefully schemed and financed.  much thought and choosing, each angle pondered.  solid weather-proofed wood purchased, big wood screws that could withstand stress chosen.  yet, the storms come.

the old dock and the canoe © 2019 kerri sherwood, david robinson