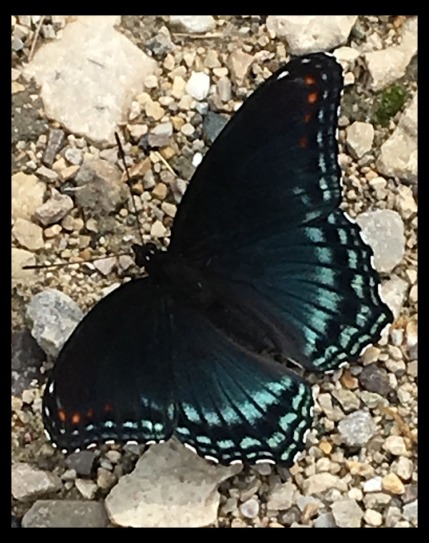 this butterfly must have known.  my heart was aching and the steps i was taking down the trail were heavy.  and then it appeared.

the glimmer of its wings caught my eye, this iridescent blackish-blue, a red-spotted purple butterfly, inviting me to stop, watch.   it flew around me and i twirled in place watching as it circled.  it landed on the trail time and again, close enough for me to video it opening and closing its wings, a greeting of sorts.  my breathing slowed down.  beauty exists.

a little research:  apparently, my little friend, the red-spotted purple butterfly, looks much like a pipevine swallowtail.  the swallowtail butterfly deters predators by being mightily distasteful.  the red-spotted purple butterfly has piggybacked onto the swallowtail’s predatory resistance by its similar markings, albeit without a tail.  predators sometimes shy away from this butterfly based on the vulgar taste of its close-but-not-related twin.  a good scheme.  and yet this butterfly – beautifully exquisite, and, although somewhat protected, is still vulnerable.

this red-spotted purple butterfly visit was serendipitous.  i needed to slow down.  i needed to watch this creature as it invited the sunlight to warm its wings and aid in its nectar-picnic.  i needed to be reminded of the butterfly in all its transitions – its metamorphosis through life, its graceful acceptance of its own life-arc, its changes, its patience, its endurance.

the next times i walk on this trail i will likely think of these two butterflies:  both beautiful and both trying to sustain, to gather nectar, to complete their own circles of life.  but one with such a vulgarity to it, such an acidity that predators stay away.  very few are lost in the lesson that predators are quickly taught about its toxicity; animals learn to avoid them.   i wonder about these swallowtails in community with other butterflies.  and i think about the red-spotted purple, sans toxicity, trying courageously to protect itself in its habitat.  it looks a little like a swallowtail, but it’s not.  it doesn’t poison the animal who consumes it.

much like people.  we look much the same.  each of us, beautifully exquisite.  and yet.  some pipevine swallowtails, toxic and cunning.  some red-spotted purples, pure and vulnerable.