one of the funniest things to come out of joey coconato’s backpack out in the middle of nowhere was a can of kraft grated parmesan cheese. there were definitely other funny things too, though: a bottle of sriracha, a dozen eggs, avocados, brats, bota box wine. he is not your regular backpacker. joey is not afraid to carry stuff. he’s not afraid to go back-country. and he’s not afraid to bust the norms. passing this display in the grocery store made me laugh aloud and think of joey.

one night recently, in the wee hours, i was awake and, thus, so was david. we chose a PCT trail video to watch and got through the whole video with nary a yawn. they had mentioned mountain house meals, so we were curious. we visited – at 3am – the mountain house website and were astounded to find many meals that sounded so delicious they instantly made us hungry. we were also astonished to find that each one was just shy of $10. that would mean that if we chose to hike the pacific crest trail – for about five months – and each of us had a mountain house meal for breakfast and for dinner – it would cost us (do the math: $10each x2of us x2mealsaday x30daysamonth x5months) about $6000 just for those meals, not to mention lunch or snacks or gear or permits or or or…. so, no wonder joey carries baggies of pasta and flour tortillas and avocados and parmesan. we literally clinked with him (virtually) when he whipped out the bota box of wine to celebrate with his hiking mates.

we haven’t long-distance hiked. yet. i suspect at some point we will try this (or some part thereof). we love hiking and we are addicted to these backpacking trips, these long-distance trails. we have watched joey all through the pandemic. his hikes have kept us sane in days of seesawing sanity. and apparently, though we are just simply joey-fans, we have talked about him enough that we have received email messages asking us for his contact information.

we have viewed john muir hikers in high elevation and appalachian trail hikers in distinctly humid-humidity. continental divide and the colorado trail thru-hikers. norwegian xplorer wherever he hikes. pacific crest trail hikers ‘heading somewhere‘ and ‘walking with purpose‘ have captured our attention as they hike out west right now, live and posting. we felt sad as ‘miles to go‘ gave up her brave and gigantic quest to finish the pct this season. these people are out there – doing life the best they can in the best way they can. present in each moment. we root for each of them. just like we root for joey.

we’re not sure where joey coconato is right now. he hasn’t posted a new video in quite some time. he is one of the best examples of being one with the outdoors we have seen. he has been making his way in the wilderness for years now, respectfully and with all good intention and gratitude, and we guess that the wilderness loves him as much as his viewers do.

we suspect – and hope – that he is safely out there somewhere, pitching his hand-me-down/loaned tent on some ridge or under some trees or in some gorgeous meadow or next to some lake, gazing around his campsite, drinking it all in, taking his clanging aluminum pot off of the outside of his backpack where he has it tied as an alert to bears in the area and is boiling some pasta up and adding in some parmesan – right from the 8 oz can he carries with him. what a good life he lives.

cheers, joey. and all the rest of you hikers out there, carrying the very least and experiencing the very most. don’t forget the parmesan. 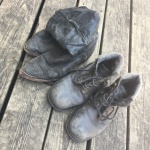 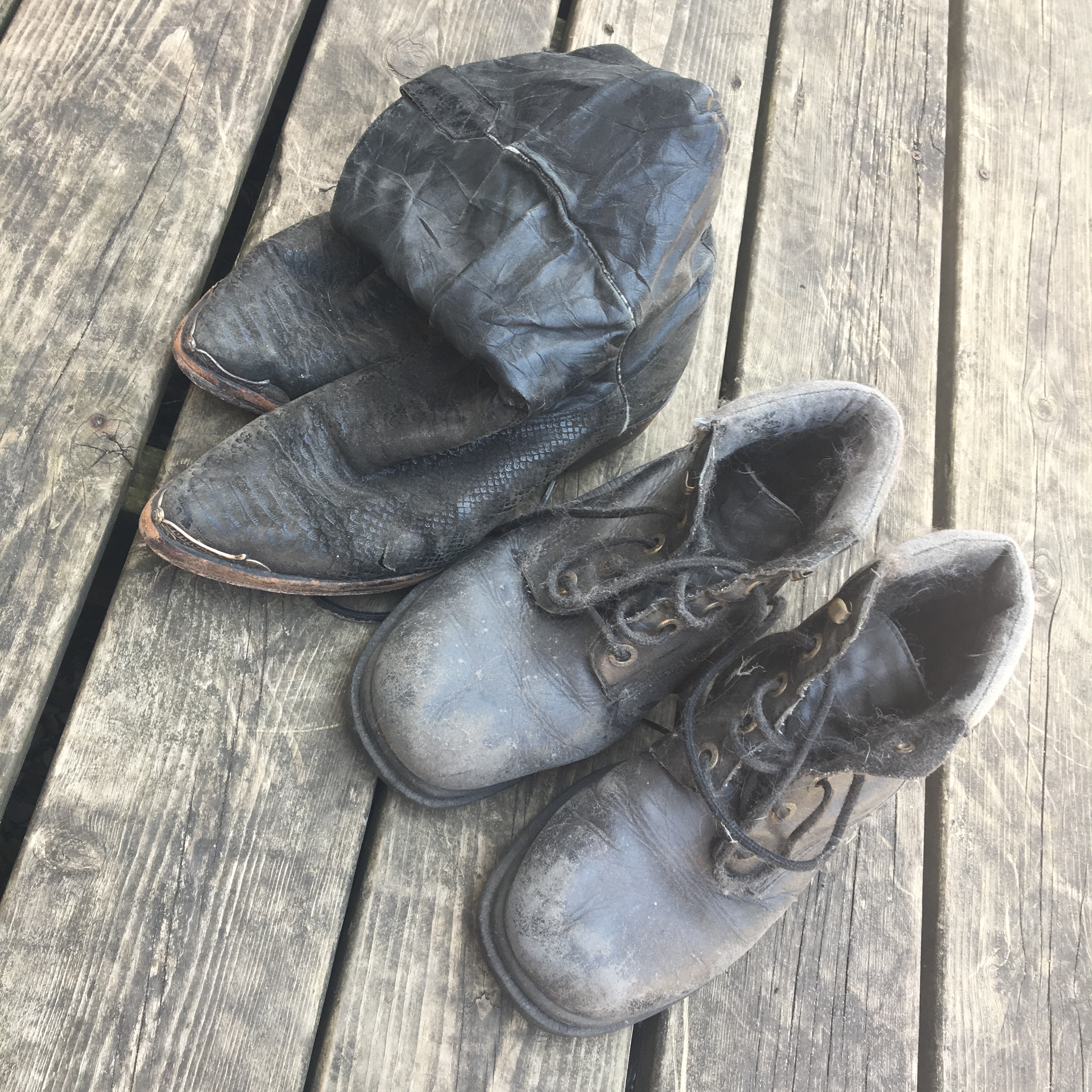 these old boots.  save for the laces, which were definitely in-beaky’s-book-worth-saving, these boots are now moving on.  looking at them, side by side on the deck, i could hear my big brother playing the guitar and singing, “these boots were made for walking, and that’s just what i’ll do…”

we’ve run out of everest movies to watch.  we have seen all the hollywood movies, all the national geographic movies, all the north face and eddie bauer movies and the rolex movies.  we have watched youtubes and imax-without-the-max-part.  we have sat through short home videos and a two hour and three minute go-pro video with no narration and hardly any talking.  we’ve watched k2 and annapurna and aconcagua and denali.  we have run out.

we have now moved on to the appalachian and pacific crest trails.  these boots – neither pair – were not made for that walking.  we can both vouch for it.

i’ve been attached to them.  the soles have separated from the leather uppers and wearing them would be like wearing closed flip flops, but heavy-heavy and flopping around, looking to catch on something and throw me headfirst into the ground.

i’ve been attached to them.  in some way they became part of my uniform, the same way that the black zip-up sweatshirt that no longer has cuffs or a working zipper was.  i’m attached to that too.  somehow, it felt like those kept me safe, kept me going, and brought me back home.  i suspect it wasn’t the boots or the sweatshirt hoodie.

so i’m saving the laces.  they can be used in a different pair of boots.

and i’m wondering:  maybe we should fill these old boots up with dirt and plant some basil. 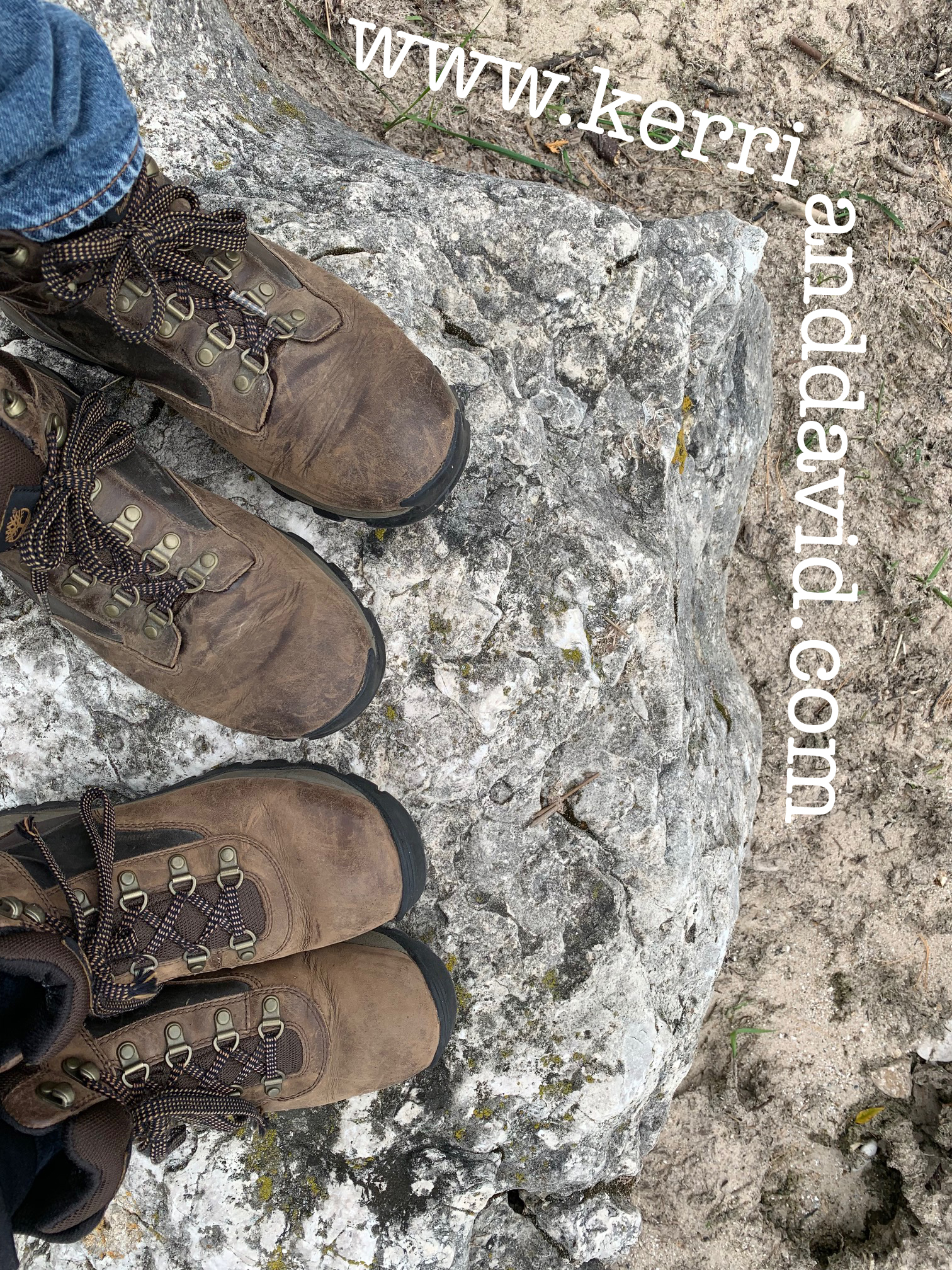 “music moves our world.”  bmi’s tagline: “we celebrate your talent.  we value your music.  we champion your rights.”

as you might guess, i just received a bmi royalty statement.  the check, which will come later in the mail and stamped with a 55 cent first class stamp, will cost them more per penny paid for the stamp than i will receive per performance play of my music.

because i am a specific-detail kind of person, here are the details of that:  if you take my check of $71.57 and divide it by the (just shy of 100,000) performance plays this particular quarter, it amounts to an average of .00074 of a cent per performance play (you read that 7/ten-thousandths of a cent).  it you take a 55 cent stamp and divide it by the check, it is .00768 of a cent per penny of the cost of the stamp (you read that 7/thousandths).  that’s 10 times as much as i receive per play.

i’m not really sure anymore why i’m telling you this, except for the big word “awareness”.  i think most people are not aware of the explosively-good-explosively-bad impact that all these music services have had on independent musicians.  headlining musicians and independent musicians – a schism of differences.  yet, i’m not a person with one or two albums, new to the industry, eager to do anything to ‘spread the word’.  i am an artist with fifteen albums, multiple singles, in the industry for decades and who did all the eager-stuff for many, many, many years.  and like you, i want to believe that all the time and energy and writing and practicing and recording and sacrifice and thought and perseverance and education and experience and drive and hard work i put in might yield something in return now – dividends – kind of like how a retirement works.

in these times of chaos – a pandemic, an uprising of protests striving for equity in race, in gender identification, in sexual orientation, in all manners of humanity – it seems that one of the most unifying calls is that of music.  music does move our world.

why, then, is this so inequitable for us?  because i don’t know about you, but there isn’t one bill in my bill folder that totals $71.57 over the course of a quarter.  dog food alone costs $73.16 for a quarter.  there isn’t a bill that is merely for $71.57 for a month.  not the phone bill, not the mortgage, not home insurance, not health insurance (don’tgetmestarted!), not the gas/electric bill, not student loans (again, don’tgetmestarted!), not car insurance, not groceries, not wifi-cable.  too much information, i suppose.

with thousands of cds in boxes in storage in the cds-have-gone-poof world, i wonder, as i have written and you have read before, where to go from here.  most professional careers keep building, arcing in some positive direction.  i try to remind myself that this music is played hundreds of thousands of times, millions of times a year.  i try to remind myself of all the times i have heard that some piece, some song, some album, some concert, some performance has resonated with someone, that it has given them a moment of reflection, of peace, that it has buoyed them.  i try not to be jaded by people who burn copies of cds for their friends or who change their email every three months to access apple music streaming for free.

but as i write checks or click ‘pay’ online for the accountant, the doctor, the mortgage, the water, the gas and electric, the health insurance, the phone bill, the wifi and cable, the car and home insurances, the student loans, the groceries, i wonder what would happen if somehow each of those things went poof and there were free ways to access all of them.

and yet, it’s true.  music moves our world.

yesterday, the senate passed the Music Modernization Act, a complex bill that is supposed to help songwriters in these days of streaming.  as quoted in one article questioning the feasibility of pushing through this bill as is:  “…niche labels and independent musicians face either a zero, or statistically insignificant, chance of a return on their investment through streaming. many report barely paying for a sandwich with their royalties.” (maria schneider, musicanswers.org) yes. creatives are still facing a grotesque misalignment of power and income despite an effort to supposedly be “helped”.

i didn’t know how vulnerable i would feel each time i released a collection of my soul, turned into tracks of music.

i didn’t know how grateful i would feel each time i stood on stage and spoke to an audience that was there to hear this music – my music.

i didn’t know how many stores, in the early days, would carry these cds (and cassette tapes, way back when), how many times i would be live on QVC-TV, how many radio interviews i would be relishing.

i didn’t know, through the years, how many thousands of cds would sell, how many boxes i would carry, how many wholesale shows or retail shows i would be present at or how many phone calls i (or wonderful people who worked with me) would make or receive, taking and shipping orders.

i didn’t know that the BMI royalty statements i was getting earlier would soon decline as our world and the internet changed them drastically.  the one i got two days ago for a period of the year included 59,000 performance counts and a $47.47 check.  streaming has made it unnecessary to purchase a physical cd or even pay for and download an artist’s music and so i agree with the writer who said: “streaming revenue for most independent musicians doesn’t even amount to pocket lint.” (m.schneider)

i didn’t know that the yearning inside me to compose and record more music to be released on cds would be stymied by the cost vs earnings debacle that has been created by an industry that doesn’t lift up the independent, while the behemoths remain behemoth.